Another old post from 2007 – Scientists listen to endangered whales 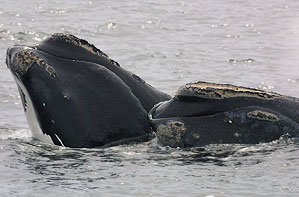 SAVANNAH, Ga. — Beneath the ocean, microphones listen around the clock for the mooing calls of endangered North Atlantic right whales in an eavesdropping experiment that could help save them from extinction.

For 20 years, researchers have relied on airplanes and their own eyes to keep tabs on right whales that migrate south to the coasts of Georgia and Florida every winter to birth their calves before returning to the North Atlantic.

Cornell University scientist Christopher Clark thinks he’s got a more efficient method that can be used to warn boaters and commercial ships to steer clear of the rare whales – use sound to pinpoint their whereabouts.

“You’ve got a 24-7 listening system,” said Clark, director of bioacoustics research at the Cornell Laboratory of Orinthology. “I think it has all the promise of offering mariners real-time information about whether or not there are whales in the area.”

Collisions with ships killed four of six right whales known to have died in the Atlantic Ocean last year. Scientists believe only about 350 of the whales still exist, so losing even one is a step toward extinction.

In late February, rearchers will collect six buoys they sunk in mid-December off the coast of Brunswick, 75 miles south of Savannah. Each contains a digital recorder collecting more than 1,400 hours of undersea sounds.

Those recordings will help determine if whales make enough noise – which sounds like a “moo” or a “whoop” – off the coast to justify trying a more sophisticated surveillance system that automatically picks out whale voices and relays them by satellite.

Gary Waxman, a developer building luxury homes and condominiums on the Brunswick waterfront, donated the $125,000 used to fund the project.

Clark says the advantage of audio surveillance is that it works day and night and in all weather. Spotting right whales from the air requires daylight and clear skies for flying.

Though the whales measure up to 56 feet long, spotters have only three planes to look for them over more than 4,000 square miles of ocean between Sapelo Island, Ga., and St. Augustine, Fla.

“It is like finding a needle in a haystack,” said Amy Knowlton, a right whale researcher at the New England Aquarium in Boston. “You might see a dozen whales in a day, and the next day you might see nothing.”

Clay George, right whale program coordinator for the Georgia Department of Natural Resources, said whales sighted in daily flyovers get reported to the Navy, which alerts ships coming into port.

But aerial surveilance is expensive – costing up to $500,000 per winter – and gets limited results. George estimates the planes spot only about 25 percent of the right whales present off the southeastern coast.

Waxman got involved after learning of the right whales’ plight while working with Georgia regulators on permits for his coastal housing development and a marina that would launch pleasure boats in the same waters as the whales.

Waxman brainstormed with his environmental consultant and they got the idea of contacting Clark at Cornell University.

Because sound travels farther underwater than it does in open air, Clark said, his microphones can pick up whales up to 10 miles away.

It also helps that right whales are almost perfect tenors. Their mid-range voices don’t get washed out by high-pitched fizzing of bubbles or the low-register shifting of ocean-floor sand.

A big question is whether right whales talk enough when they migrate south for microphones to detect them consistently, the key to making audio surveillance worthwhile.

“The jury is still out on that,” Clark said. “Mothers and calves are notoriously quiet. The mother’s not out there to advertise she’s got a baby. She doesn’t want to attract killer whales or other company.”

Clark can already tell a big difference in how right whales behave up north compared to when they travel south in the winter.

At Cape Cod, they’re awfully chatty – sometimes yielding 2,000 recordings in a single day. The whales spend their summers and fall between Cape Cod and the Bay of Fundy. In the winter, they travel south through the Gulf of Maine toward warmer waters.

With the Brunswick study, Clark’s team will compare its whale recordings with sightings logged by the aerial survey teams. Meanwhile, Clark is developing mufflers for the underwater microphones to eliminate noise caused by waves and storms.

A second array of satellite-tracking buoys will be placed offshore of Boston in the spring.

Inside each buoy, sounds picked up by the microphones are analysed by computers programmed to pick out right whale calls from other noises, using patterns based on hundreds of thousands of samples of the whales’ voices. Electronic identifications are transmitted in real time by satellites, though Clark said humans still doublecheck to make sure they’re right whales.

Multiple microphones picking up the same whale can triangulate its position from about 100 meters to as close as 50 feet, Clark said. Location points could be posted on maps on the Internet and used to issue warnings.

“Spying on animals like that is always full of surprises and it’s also relatively inexpensive,” Clark said. “Their voices are designed to be heard, so we’re taking advantage of that.”