As indicated in the article below, the Georges Bank area was up for grabs for some time. It was issued protection by the Nova Scotia Government … that protection has just been extended much to the delight of the fishing community. 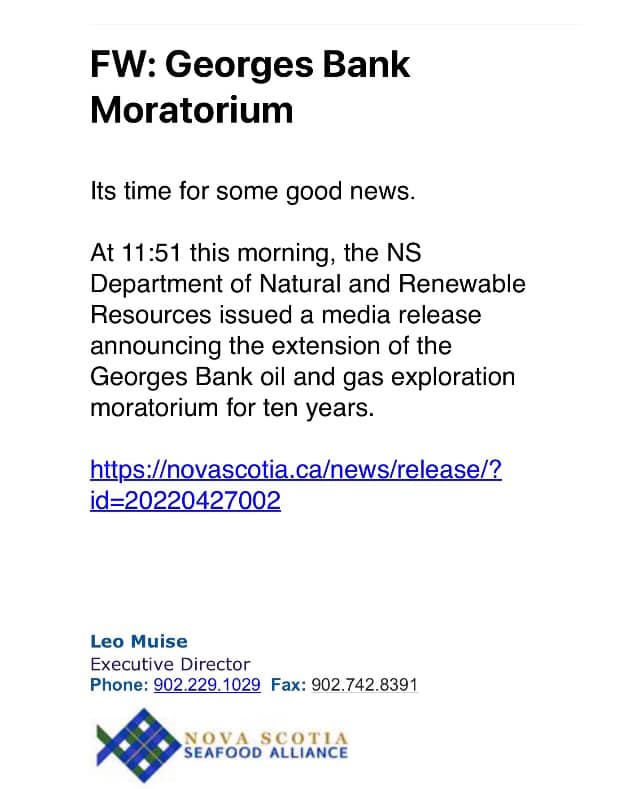 2015 Report – Beyond Shell and BP: 9 more offshore exploration leases now up for grabs

by JOHN DAVIS ON BEHALF OF CLEAN OCEAN ACTION COMMITTEE

An open letter to the Canada – Nova Scotia Offshore Petroleum Board, demanding the immediate withdrawal of offshore lease sites 1, 2, 3 and 4In 1988 the people of Nova Scotia, through their representatives at Province House, voted to protect the Nova Scotia fishery and to support a moratorium on Georges Bank. They knew that the bank was one of the world’s richest spawning grounds and nursery sites and that spawn from Georges populates many of our other import fishing grounds. They also knew that the unique attributes that made Georges Bank such an important economic generator also made it highly susceptible to hydrocarbon pollution.

In that 1988 vote, the people of this province made the conscious decision to forgo the short term potential of royalties that might have been generated by the discovery of oil and gas and instead they chose to invest in the long term, economically sustainable, commercial fishery which had been supporting Nova Scotian communities for centuries. This action has proven to be both a wise choice and an excellent investment.

The fishing community of the Scotian Shelf has fully responded to the faith and trust placed in it by that province-wide vote nearly 30 years ago. We have sustainably utilized all commercial species and fully intend to continue the careful stewardship of this incredibly important resource into the future. It is only through the implementation of stringent regulations and careful harvesting practices that this multi-species fishery on the Scotian Shelf has flourished.The Shelf now generates well in excess of a billion dollars per year in export value, makes a substantial annual contribution to the provincial GDP, provides thousands of jobs, upholds a proud Nova Scotian heritage, and sustains scores of Nova Scotian communities. The decision to support the Scotian Shelf fishery over twenty seven years ago continues to pay massive dividends, and therefore protecting the Scotian Shelf fishery should continue to be a key provincial priority.

Recently, in addition to the existing Shell and BP leases, the Canada Nova Scotia Offshore Petroleum Board has decided to place 9 new oil and gas exploration sites up for bid. These sites are located on or near every important fishing bank on the Scotian Shelf.