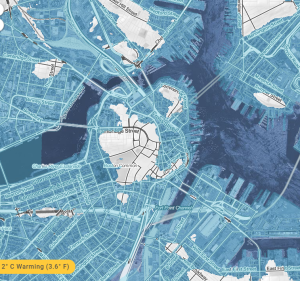 Fundy Tides has been posting articles about the potential impacts from sea level rise around the Bay of Fundy. Although there are some real worries like the Point Lepreau Nuclear Power Plant, for the most part we are lucky and the dislocation can be managed. But this isn’t the case elsewhere.

Just out of curiosity we checked some other locations along the coast … Boston was first and the potential impacts there, if global temperatures rise by 2 degrees C, may be truly catastrophic and since our economic well being is closely tied into our historic north-south coastal trade, we can expect major negative impacts all along the coast.

Remember, the world’s leading climate scientists have warned there may be only a dozen years for global warming to be kept to a maximum of 1.5 C, beyond which even half a degree will significantly worsen the risks of drought, floods, extreme heat and poverty for hundreds of millions of people.. If so, the estimate on the right side would apply. Subscribe by email to get new posts on this subject (see below).

It is generally thought that tidal range may stay the same, but that the cycle range will rise causing flooding to remain on land for a longer period and increasing risk of damage to coastal facilities.