I plunge into the 32-degree waters off Bell Island, Newfoundland and descend with my dive buddy to the S.S. Saganaga. This former iron ore carrier — along with the S.S. Lord Strathcona, S.S. Rose Castle, and the PLM-27 — was torpedoed by the German submarine U-513 during World War II. All four ships now lie in a little over 60 feet of water completely upright and intact except for where the torpedoes hit them.

We swim through a torpedo hole around the huge hull and over decks teaming with corals and anemones and lumpfish. I’ve been told the funnels and lifeboats are gone, but I had no idea that everything else would be so well preserved. The exception is the anchor, which was blown off to the stern and now sits in the sand, home to a blowfish. Giant crabs and starfish have taken up residence on the bridge and corals and sea anemones cover a gun, the hull, the radio room, and the captain’s quarters. 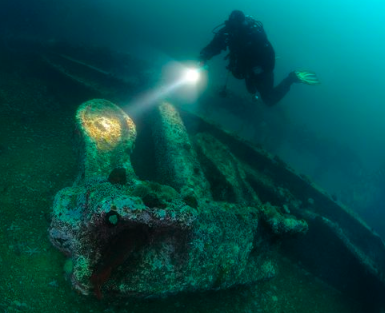 Anchor of the S.S. Saganaga

On September 4th, 1942, the S.S. Saganaga lay at anchor awaiting orders to set sail for North Sydney with a load of iron ore. That night, the U-513 slipped into the bay and waited to strike. The next morning at 11:07 am, the Germans fired two torpedoes, but they neglected to set a battery switch and the two torpedoes sank to the sea bottom. After the first salvo, the U513 fired two more torpedoes. Both hit amidships on the port side and the S.S. Saganaga sank beneath the waves in less than thirty seconds.

Of the forty-eight crew including three naval gunners, thirty were later reported missing.

Today, the S.S. Saganaga, S.S. Lord Strathcona, S.S. Rose Castle, and the PLM-27 are considered some of the world’s most memorable cold-water dives. I chose the Saganaga because it is the most beautiful of the four ships. Fortunately, no one is around but us: We have the entire wreck to ourselves. 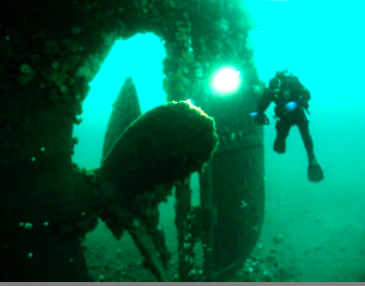 Propeller on the S.S. Saganaga

Part of me hopes we’ll find something new. A couple of years ago, someone discovered a second Marconi Room on the SS Lord Strathcona and someone else found the Safe Room on the SS Rose Castle. In Labrador, recreational divers located the missing wreck of a World War II seaplane in Battle Harbor, solving a 65-year old mystery.

When you dive with Stanley, nothing comes out of the water and nothing gets left behind, which makes perfect sense because one of the key draws of Newfoundland’s shipwrecks is how pristine they’ve remained. Many of them still have personal effects in situ, and Rick Stanley hopes to keep it that way. Stanley has become the steward of Newfoundland’s waters because shipwrecks are offered little in the way of protection. Stanley and his staff make sure that the artifacts remain on deck and in holds instead of finding their way into private collections. To accomplish this goal, Stanley co-founded Ocean Net, a non-profit organization dedicated to protecting the ocean and which organizes beach and underwater cleanups.

I don’t want to leave the S.S. Saganada, but according to my computer it’s time to ascend. We make our safety stop, then surface and climb back onto the dive boat. My dive leader helps me out of my BCD.

How do you describe what it’s like to float around a pristine World War II wreck? I can only grin stupidly.

“Come get warm,” says boat captain Bill Flaherty who is from “around the bay,” meaning, outside the country. The Captain has cooked up a big steaming pot of moose and barley soup; it’s delicious and exactly what I need to warm up.

“I’ve got something for you,” says Rick Stanley, and hands me an Ocean Quest T-shirt which reads: “The Bell Island Wrecks, Newfoundland, Canada.” All four wrecks and their torpedo dates are listed on the front. On the back is a “Diver’s To-Do List” with a picture of each wreck and a check box. I borrow Stanley’s sharpie and check off the S.S. Saganaga.

I won’t have time to do the other three ships this trip, but I know the draw of Newfoundland’s 10,000 shipwrecks will bring me back.